What Is The Difference Between Wi-Fi Standards? 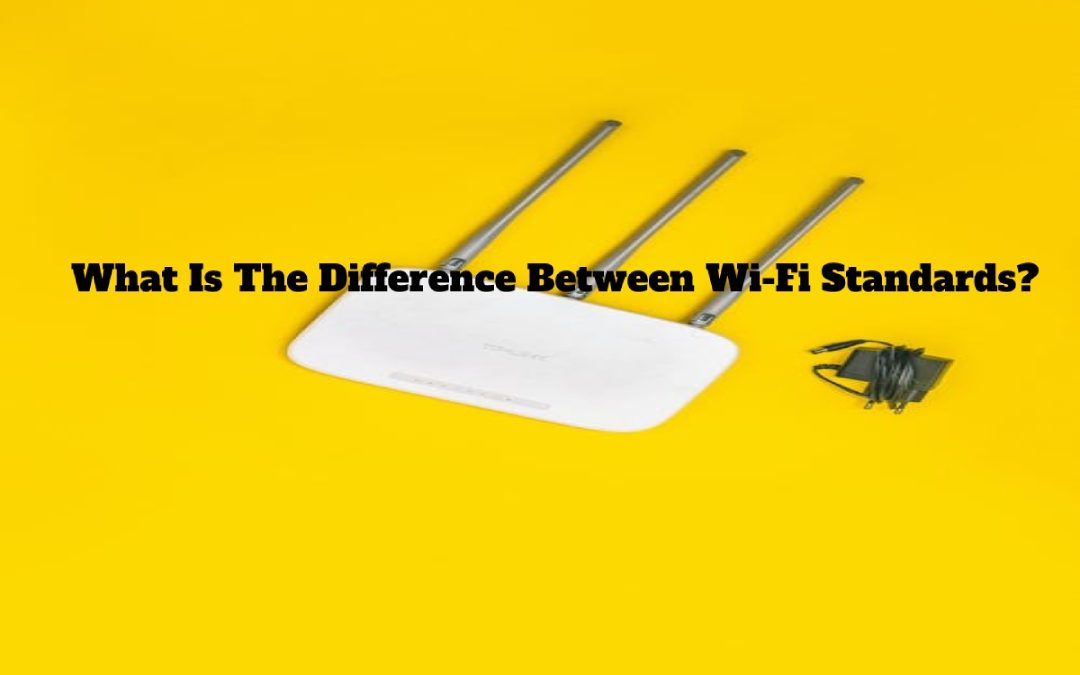 Wi-Fi standards have freed us from LAN cable restrictions to access essential websites. There are undoubtedly mobile network technologies such as 4g and 5g networks that work well on the go, but nothing beats Wi-Fi in terms of stability and speed.

If you go today to buy a Wi-Fi router, you will find plenty of options. These options come in 802.11 and are followed by a letter. For example, a, b, n, ac etc., number 802.11 may seem like a common term for someone with no technical experience, and it gets worse with the random character set (a, b, n).

Fortunately, confusing terms for Wi-Fi networks change. The Wi-Fi Alliance, another organization that regulates Wi-Fi, has proposed a more straightforward way to classify standards. IEEE 802.11ax will be newly promoted as Wi-Fi6. But what about Wi-Fi 5 or 4? The Alliance named the Wi-Fi standard IIEEE 802.11n B Wi-Fi 4, IEEE 802.11ac B Wi-Fi5.

What is the difference between different Wi-Fi standards? – what does 802.11 mean in Wi-Fi? – Wi-Fi standards – wireless internet technology. So, technically, wi-fi6 is standard 802.11ax, and in the future, that sequence will be taken into account as the next Wi-Fi 7 and Wi-Fi… 8.

Since the launch of Wi-Fi in 1997, Wi-Fi standards have evolved continuously. Every new generation of Wi-Fi standards is better than its predecessors in speed and technical features. So every new Wi-Fi update has its tariff name.

802.11 has become an old Wi-Fi standard. Support by increasing its maximum speed to 1 Mbps. It may seem cynically too low compared to today’s standards, but remember it was in the late 1990s when the internet was evolving in its first steps.

Although launched in conjunction with 802.11b, both have apparent differences. For example, the 802.11a works at 5ghz instead of 2.4 GHz, which means there is little chance of interference with other devices. The 802.11a also enjoyed a better speed at 54 Mbps.

The 802.11a is the first Wi-Fi standard to offer OFDM technology and is an abbreviation of the word (double perpendicular frequency division). This technology is multi-user, as multiple devices such as phones, tablets, and laptops can… Etc.

To be connected with a single wireless device. OFDM cuts wireless channels into several partial channels so multiple devices can connect to one wireless internet simultaneously. Unfortunately, both 802.11a and 802.11b are outdated, so we have new Wi-Fi devices with new standards to be included in the following parts.

802.11n is a substantial improvement over previous Wi-Fi standards. Not only did it develop speed to 300 Mbps, but it also came with dual support technology that supports both 2.4 and 5 GHz frequencies. The top speed may exceed 600 Mbps due to a 5ghz frequency.

802.11n introduced MIMO (multi-input and output) technology, also multi-user to complement OFDM technology. OFDM is dividing wireless channels into smaller intermittent parts. But on the other hand, MIMO allows wireless signals to be transmitted over shared channels instead of just one.

To understand MIMO, think of a one-way way versus a multi-directional one. Previous Wi-Fi standards, such as a one-way highway while 802.11n, represent a multi-directional highway that uses technology to transmit data across multiple paths. MIMO 802.11n used four wireless channels, one of which was 40 MHz.

Introduced in 2014, he worked exclusively on a 5ghz frequency. Its top speed is one GB per second. Instead of using four channels in 802.11n. 802.11ac supports eight channels with an 80 MHz range each.

802.11ac also introduced a new technique known as packet configuration. When you think about the nature of a typical wireless router, you’ll find that it sends wireless signals in all directions. What if you can harness your Wi-Fi for the device you’re working on?

That’s precisely what packet configuration means. Using unique algorithms, the technology determines the approximate location of the connected device. It then sends the wireless signal toward the device’s reception, which results in better signal capture.

The latest generation of Wi-Fi networks known as 802.11ax or the newly launched Wi-Fi 6. although the speed development wasn’t significant compared to Wi-Fi 5 and Wi-Fi 6, it’s fantastic at 9.6GB per second.

Depending on 802.11n, Wi-Fi 6 dual frequency technology support; is 2.4 GHz and five GHz. in fact, there will be another Wi-Fi standard known as wi-fi6e that will operate with a 6ghz frequency range.

Review What Is The Difference Between Wi-Fi Standards?. Cancel reply

What Was Apple's AirPower? Have You Been Permanently Abolished?

This Majestic Solar Mountain Can Generate Power Anywhere On Earth.