Technical Devices That Today’s Generation Doesn’t Know How To Use. 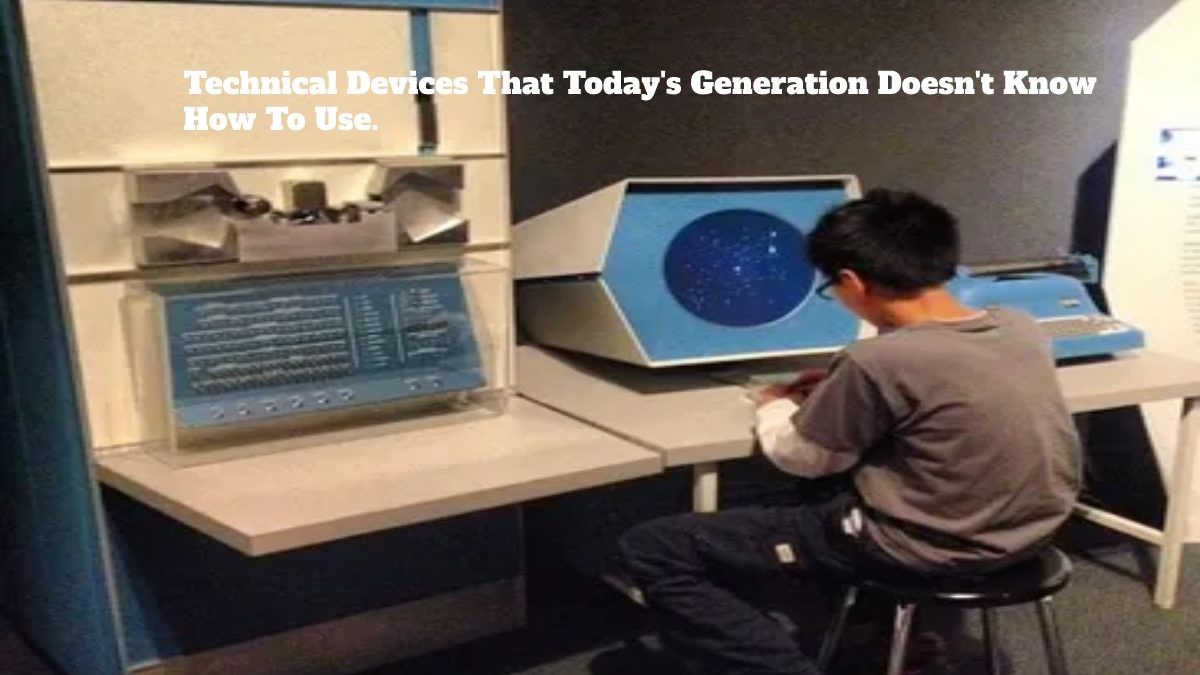 There are always gaps between people born at different times, but technical devices is the most obvious.
Many tools came into being out of date in a few years, many of which seem to have come to us — adults — not so long ago and have evolved into unknown to children conscious enough to use the latest high-tech tools (the stage that begins today at the age of 3)

Children and young people born in 2000, 2005 and 2010 were born during or shortly after the enormous technical transformations, from complex drive-copied software to cloud-based software, cell phones to smartphones, desktops and laptops to small mobile computing devices.

Many technical devices are extinct or on the verge of extinction because smartphone applications today have replaced them.

We will take all this into account to give ten examples of devices that adults used today when they were children, young people, or even a few years ago, which for today’s children look like old traces that you can’t read.

The original iPod was released in 2001 and is a digital music player with a monochrome screen that today’s children are puzzled by; it requires headphones to work because it doesn’t have a built-in speaker, and you also have to rotate a wheel to navigate songs, and nothing else is allowed. Still, listening to music, you can’t download or buy songs from the Internet through it. Still, you have to connect it to your computer via a cable to carry music content.
Like the rest of the devices, iPods were large and thick by today’s standards and couldn’t do many tasks. It has since been transformed into iPod Touch, a small integrated wi-fi tablet that can play music, movies, games, etc.
It’s closer to the iPhone without connectivity, and it’s a faster device for today’s kids. In addition, all modern smart devices have a music player, eliminating the need for a particular music player.

The use of classic computers requires a high percentage of technical intelligence, especially those that work directly on a line of commands and need contact with external storage devices and other components.
It has evolved into easier to use over the years with the emergence of accessible graphical user interfaces (GUIs).
With newer operating systems, we no longer have to do a lot of operations (or any of them), making background operations and computer setup a little vague for children.
Today, computing is more and more done using mobiles that need to work much less in the background.

According to a 2013 survey conducted by the non-profit organization Tomorrow, 64% of students connect mainly to the Internet through mobile devices (3G or 4G) and 23% via smart TV or gaming consoles.
Most people may not know the commands, but children find some strangeness in running these old computers. For example, we need to run the computer and all the external devices associated with it individually instead of pressing only one power button.

Younger generations also don’t know how to change wi-fi settings, explore computer problems and reinstall the operating system (which is necessary if the device is exposed to a virus). In contrast, existing mobile devices work with a single click. And enable you to download apps from an app store to work immediately. So if there’s any fatal error. You don’t need more than restarting it, getting out of the app, returning it, or handing the device over to a specialist to fix the problem.

Text messages have been a common form of communication for years. And they began in earnest after cellular service providers allowed them through competing networks around 2001.

Smart devices then dominated full keyboards. Especially since the iPhone came in 2007. People used them a lot on click phones and similar mobile phones. Each number had more than one character.

You have to click more than once to reach a particular surface instead of full keyboards in the current devices and to put a distance. You had to use the star button or box. For today’s children. This seems slow and difficult to deal with.

Another technique that did not continue during this revolution was film cameras. However, it began outperforming film

As a result, children grew up saturated with these cameras. And if an old film camera shows a child. He probably won’t know they need movies or how to get to these movies to take a single picture.

The lack of a screen would be puzzling for them. Let alone the steps and costs of extracting images from the film. Today, smartphones have high-resolution cameras that weaken the digital camera market.

Pagers (One of the technical Devices)

it spread in the 1990s, allowing people to send a phone number or other digital message to the device holder by calling the device number. And then typing the message number.

When it starts to ring, all you have to do is look at the small screen and reconnect. It began to be replaced by mobile phones in the 1990s. Which allowed users to make a call or send a message from almost anywhere.

Today’s intelligent devices certainly offer more comprehensive communication options. Pager is now used to work formally in areas such as health care. So today’s children who decide to become doctors should learn to use them.

Early home gaming devices such as the Atari-Atari 2600, Atari 7200 and the original Nintendo Entertainment System (NES) read software from toy tablets or cartridges. Which are strangely solid tools with an internal panel exposed metal contact points at the end that create contact when inserted into the device.
Even teenagers will take some time to figure out how these devices work. And will have difficulty knowing what to do if the game doesn’t work immediately (sometimes, it will require removing and re-inserting the disk several times).

Applications And Programs On Cd And Dvd

Not long ago, you had to buy solid copies of apps to carry on your computer.

Prefabricated programs began in the 1970s and 1980s on cassettes or floppy Disks and eventually evolved into high-capacity discs (CD-ROMs) and DVD-ROMs. In many cases, on the imposition I wanted to play a game, the disc must be in the CD drive until it works.

You can copy any data you need on a cd or DVD. Now, you can transfer this data using a flash drive or send it online.

High-speed home internet is everywhere. And you may be used to downloading software from the cloud even on regular computers. So manufacturers are dispensing these CDs on some complete computers.

You can perform many tasks in the cloud that require customized software on these devices, including creating documents. Storing and editing images. Verifying or sending a message through email.

Review Technical Devices That Today’s Generation Doesn’t Know How To Use.. Cancel reply

How Do You Build Your Website Without Writing A Code?

How to Write an Essay in 6 Hours or Less

How to turn your house into a smart home?