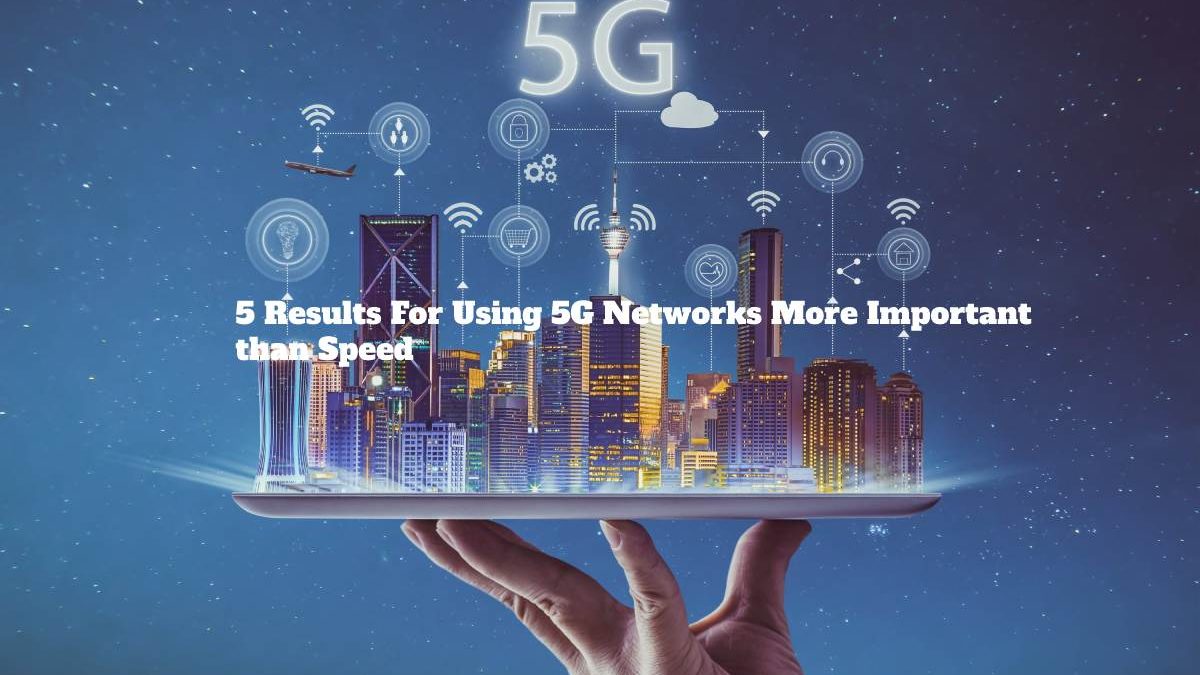 When you mention 5G networks, the first thing that comes to mind for many of us is the unprecedented higher internet speed, and it’s all about high-speed downloads, downloading web pages faster. Still, the rate is one of the many features 5G networks offer.

Many describe 5g networks as the technology that will change the world. Becoming like electricity, or cars, because of their significant impact on the global economy.

5G networks can also be used to develop self-driving cars through real-time sharing of information and data between vehicles to help ease congestion and build drones and high-speed trains. They will also help to bring about a new era of electronics. Where intelligent devices, bright clothing, and everything connected to the Internet of Things can be worn. Contributing to the prosperity of the Internet of Things (IoT) by building a new economy based on the Internet of Things on a large commercial scale.

Of course, none of these things will happen overnight, but it will take years and years for 5g networks to be available on a global scale, where intelligent cities big companies will get them first. While it will take years to reach all the cities of the world.

However, we know that 5g networks, when available, will change the world around us, and there are a lot of areas and industries that will change radically. And will be much bigger than just high speed.
Here are five results for using 5g networks that are more important than high speed:

Many free instant messaging apps such as WhatsApp, Telegram, Viber, etc. However, regardless of whether they are free. There are other reasons why some users use the messaging app to make voice calls, where voice calls — made via WhatsApp, or any VOIP-based voice service, such as Skype, Zoom, or Google Voice — are more pronounced in stages of the phone network.

But high-resolution audio was not a top priority for 3g, or 4g, 4g network designers. Still, it was different when designing 5g networks, as good accuracy became a top priority. As a result, you can expect to make all voice calls video calls quickly, uninterruptedly, and more clearly.

Over time, the audio resolution is supposed to exceed HD limits, reaching the so-called Voice over 5G, which seems to be an integral part of other 5G network services. Such as video connectivity, Telepresence, augmented reality, and virtual reality.

5G networks are the first generation of mobile networks designed to connect to the M2M, so there is an essential part of the specifications of 5G networks, known as mMTC, which means a considerable number of machines are connected simultaneously. As a result of this type of communication, we will find up to 1 million connected devices per square kilometre, and that’s what the IoT world needs.

Why is this important? Let’s assume you’re on a sports field. In a crowd of 50,000 people now with 4g networks. It’s hard to get a signal to make a call or send an SMS during the game.

But the situation will be different with 5g networks. Where anyone at a significant event will be able to connect online, broadcast live videos, make calls, and find more easy technologies.

For example, in the stadium itself, large screens scoreboards can be connected to the network, and anyone on the field can live stream from their phone. So viewers can wear virtual reality glasses, which broadcast live videos from all cameras throughout the stadium. This provides them with a closer view of the game.

Away from stadiums, 5g networks will be beneficial in crowded places, where live updates are essential, such as at airports. And train stations. Providing us with better connectivity on the go.

The Development of Self-Driving Cars

The essential connections 5G networks will support include URLLC, which means faster connections with superior reliability, allowing reliable instant connections between the network and devices. In addition, it will make the widespread commercial deployment of self-driving cars a reality. Allowing vehicles to receive instant updates on their speed and location accurately.

It works because each vehicle communicates with other cars at high speed, and there is the primary vehicle that controls speed and direction. All the following vehicles respond to it. Which will accurately match the brake movement and acceleration with the movement of the driving vehicle.

Although the most important impact will be in favour of traffic, the primary use of technology is more efficient for transporting people and goods and reducing carbon emissions and environmental pollution.
Gunnar Tornmalm. Head of systems development at Scania, Sweden, says: “In addition to helping improve highway traffic and reduce the conservational impact of transport. Platooning also saves 25% of fuel consumption.”

“This technology will only reach the market on a large scale if vehicles from more than one brand can communicate with each other. And that’s not far away.”

Although 5G networks will make many positive changes, they will have some adverse effects. Perhaps the biggest concern to date is the health problems that humans can cause — the spread of cancers specifically. Due to the installation of many Antennas in cities to create 5G networks.

In November 2018, more than 180 doctors and scientists filed an EU petition calling for the urgent decommissioning of 5G networks due to this new technology’s potentially serious health effects.

“Telecommunications companies are trying to introduce this new technology that could have real and unintended adverse consequences. And these consequences will affect the health of humans, plants and animals,” said Dr L. Harrell. Professor of oncology at the Swedish University of Örebro.

The new york times also published a report explaining a study that there was “some evidence” of cell phone risks and their association with cancer. At least in mice, so the debate is expected to continue.

The Essential Things to Know About External Graphic Cards

Answering the Call – Introduction, Devices that Support and More